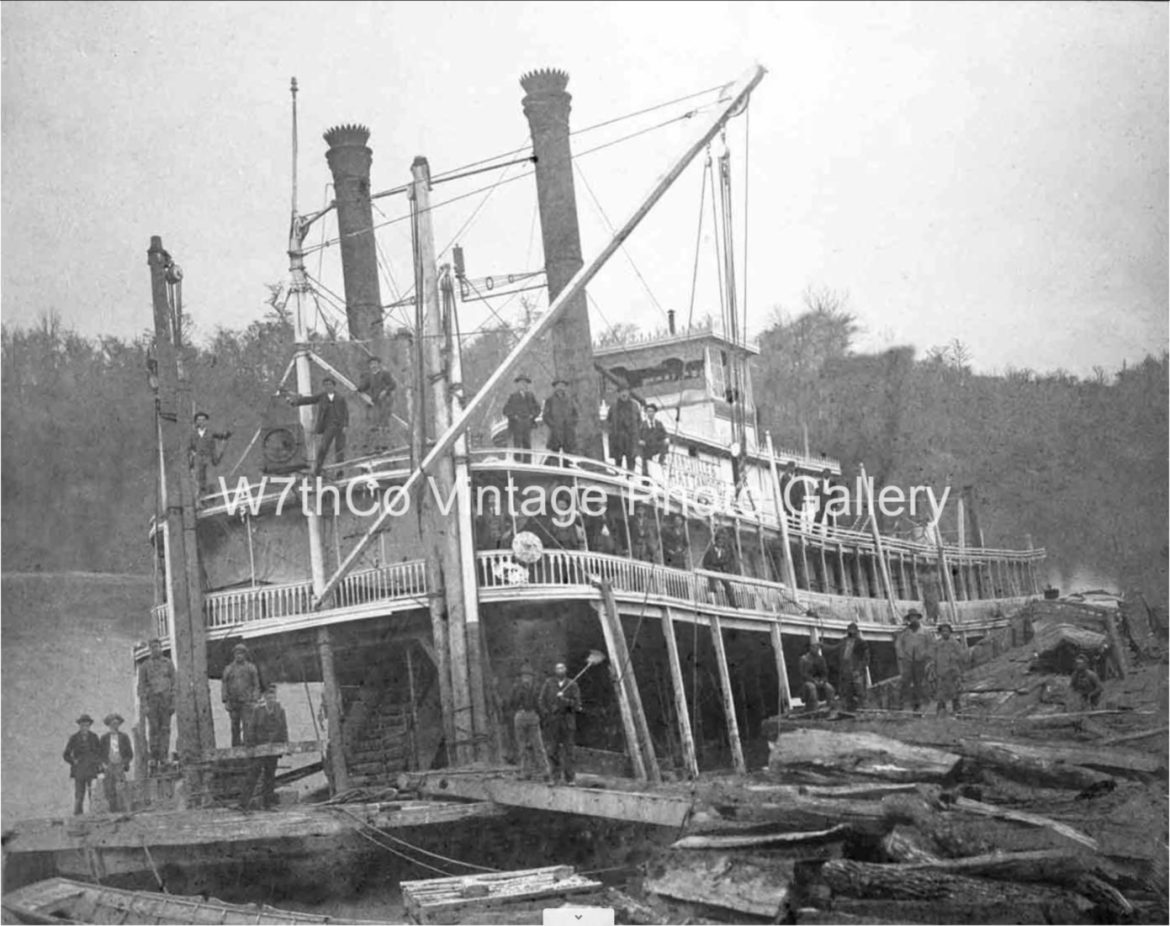 Those of you that have visited our gallery know it’s more than photos. It’s about preservation. Preservation of the images, but the stories too. Like the saying goes; “Every picture is worth a thousand words.”

Well, this may not be a thousand word post, but the story is a good one. While looking for Mule Day photos for our Spring 2022 show a discovery was made in some photos from 1938. However, the photo we discovered was not from that year or even that century. Hidden amongst the other negatives was an envelope labeled “Wreck of the Allen J. Duncan 1896.” The image was clear and immediately recognizable as a steam boat on the shore of a river with several men standing on the boat and on the shore. On the side of the boat was the sign “Evansville & Chattanooga”. That gave us a lot to go on, but it turned out that the year was wrong.

The Allen J. Duncan was an electric light steamboat built in Indiana that made runs from Evansville, IN to Chattanooga, TN via the Tennessee river with stops along the way including Florence, AL. The round trip took about a week with launches on Tuesdays and returns on the following Monday. The steamer carried passengers and commercial freight as well.

According to newspaper accounts the Allen J. Duncan was on the Tennessee river near Peter’s landing (near Perryville, TN) on October 14, 1894 when it ran across rocks below the surface of the water. When the boat began to list to one side the crew made the decision to run aground on the shore to avoid sinking. They saved what cargo that could be carried, such as raw lumber (in the foreground), but had to leave forty-five bales of cotton. In December the ship was declared a total loss and towed out into deeper water where it sank.

You may be wondering how this photo negative found it’s way into the Orman collection. Yeah, we ask that question every time we come across an amazing photo that hasn’t been seen in decades. W.A. Orman’s father started the Maury Democrat newspaper in 1882 and we know that some of our images are connected to that paper. So, maybe that is the reason that we have an image of the wreck of the Allen J. Duncan. It’s a great photo and a great story. You can see it at our gallery or online along with several other photos in our Spring Show 2022 collection.