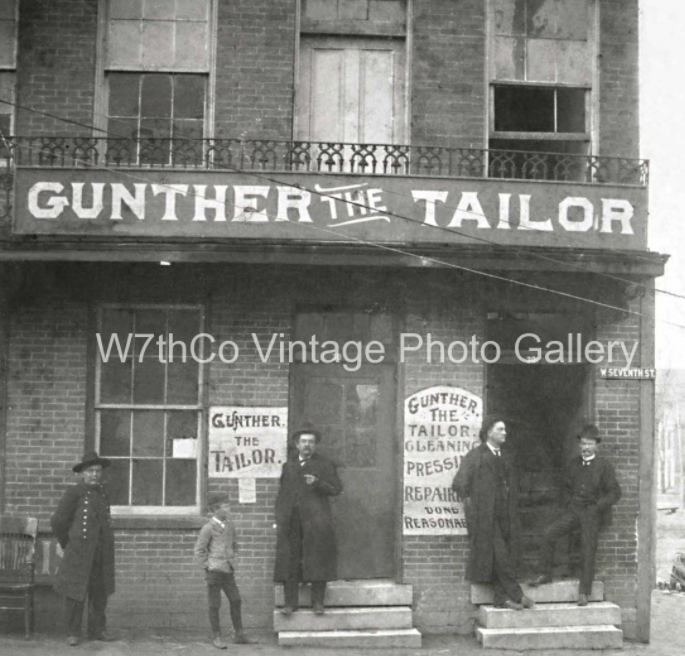 Don’t think that this is a political post. It’s not. This is the story of Columbia, TN and that is the story of America. We are a country of immigrants. You learn it in history when you are in elementary school usually around Thanksgiving when you are told the tale of the Pilgrims. For me, I have been seeing the history of immigrants in photos and learning how it became part of the culture of Columbia as well as it’s strength and character.

One of my favorite photos is titled Gunther the Tailor. Just look at the featured image for this post and you’ll see that it didn’t require any creativity to come up with that title. Like many of the photos we have, this one had no information with the negative. We knew it was from the corner of W 7th St and Garden because of the street sign. A little digging and I found an advertisement in an old Herald for “Gunther the up to date tailor”. Without a full name, it was difficult to find out much more. After all, Gunther could be his first name or his last name. But, then I stumbled onto it while going through census records.

Oscar Gunther was his name and his family immigrated from Switzerland to America. His father was a tailor and Oscar apprenticed with the family business in Ohio before moving to Columbia before the turn of the Century. Gunther, the tailor, was a young man in his early twenties when he started his business in Columbia. He ran his tailor business from the building in the photo above, but had to move when the entire block was torn down after a fire (rebuilt as the Woldridge Drug store 1900). His first move was just down the street towards the Courthouse, but soon after he moved to the Brown block where he continued his profession.

He was not alone. The names of the businesses, tell the tale of the many cultures and countries represented by immigrants or sons of immigrants that filled the downtown of Columbia in the early days. Each of them brought a talent or skill, or perhaps just a drive to succeed. There are many success stories, the rags to riches type, that are the examples of the American Dream. These are the people that shaped this city and left their mark in the buildings and grand houses that are all around historic Columbia, TN.