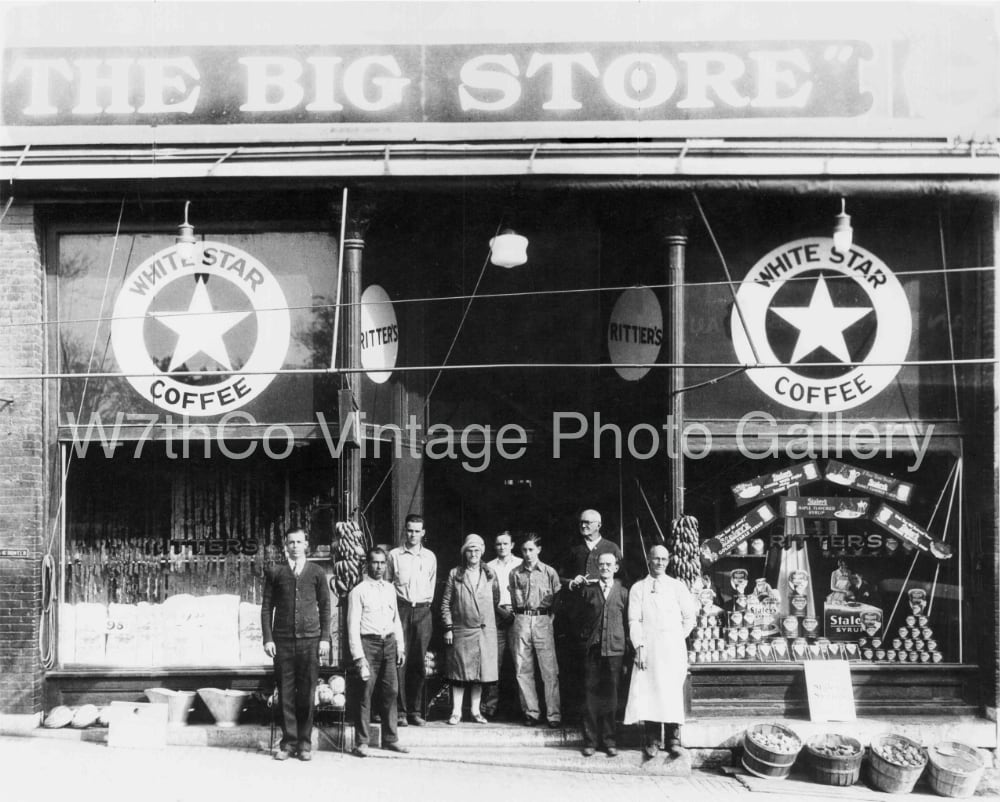 If you have read some of our blog posts here you may recall us mentioning Frank Sowell’s book, All the Old Familiar Places. This book has been a terrific resource for our research on photos from Columbia. Discovering the story behind the photo of “The Big Store” is another time that we have to thank Frank for his gift to our community.

You can tell immediately that this photo is a grocery. You might think it was called the Big Store from the big letters above the doors. However, a closer look and you learn that this is Ritter’s grocery. We don’t have any other photos of Ritter’s. So, we weren’t sure where this business was located. In fact, there is nothing that really indicates this is even Columbia.

We pulled out All the Old Familiar Places and looked up Ritter. Sure enough, Frank had included that 817 S Main St., the White Star Cafe, had previously been Ritter’s grocery. He even gave us the names of Mr. and Mrs. H. E. Ritter. Of course, there is a personal connection between Frank and the Ritters. His father worked at the grocery store before opening his Little Gem Cafe in 1930.

So who are the people in this photo and what year was it taken? Based on the Staley Syrup display in the window on the right we initially thought it was circa 1930. However, we are doing more research on the Ritters to see if we can identify them in the photo. If the woman in the photo turns out to be Tennie Ritter, then the photo is before no later than 1929 because that is the year she passed away. We are still working to discover the whole picture. As always we invite you to help us.

Interesting note on the White Star Cafe. As you can see from the photo, for many years the windows were painted with the White Star coffee logo. When Ritter’s was gone and a cafe opened, the circle and white star remained and so it was a no brainer what to call the cafe, White Star.