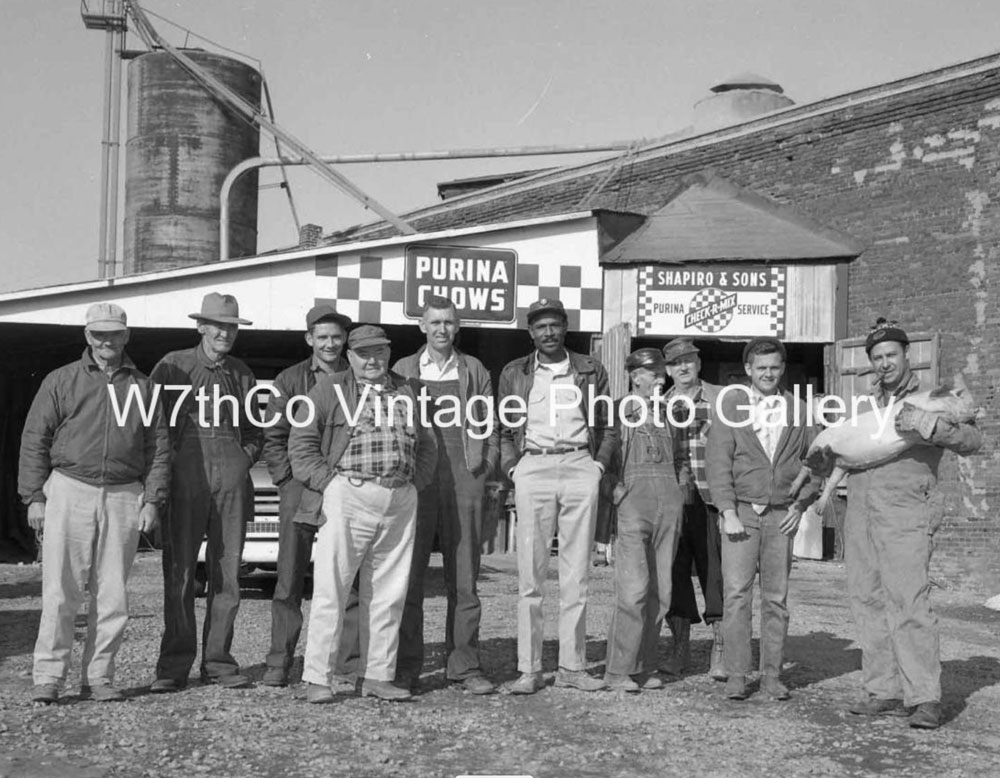 The Purina checkerboard is instantly recognized by most of us. Stores all over America were (and still are) decorated by this red and white pattern which meant you were looking at a feed store. When we came across this photo we got more than a familiar brand. We had a puzzle too. Why is this man holding a pig?

Of course you can see from the signage that this is Shapiro & Sons Feed Store, located by the railroad tracks on W 11th St and the corner of School St. (building is still there). The envelope that the negative was in had the photo dated 1965. However, there was no name other than Shapiro. It’s a really cool photo that indicates a time and place in American life. Or maybe I should say life in rural America. The clothing, attitude and background all say farm. Though, without name tags, we still didn’t know who these men were.

Not long ago we had met Doug Shapiro while at Taps Off Main. We told him about our gallery and the Orman Collection. He told us a little about his family and asked us to let him know if we ever came across photos of Shapiros. A few days after we uploaded this photo (and some others) we ran into Doug at Southern Tre’, pulled up the image on an iPhone and showed it to him. He paused for a second, smiled and said “that’s my dad!” while pointing at the man holding the pig. He told us his father was Joe Shapiro and that having a cigar in his mouth was commonplace, but that holding a pig wasn’t… but he was quite a character and that would be just like him to pose with a pig for a photo.

We have shown this photo and told the story a few times and people really respond to the image. A couple of folks have bought prints, including Doug. You don’t have to be a Shapiro to love this photo.