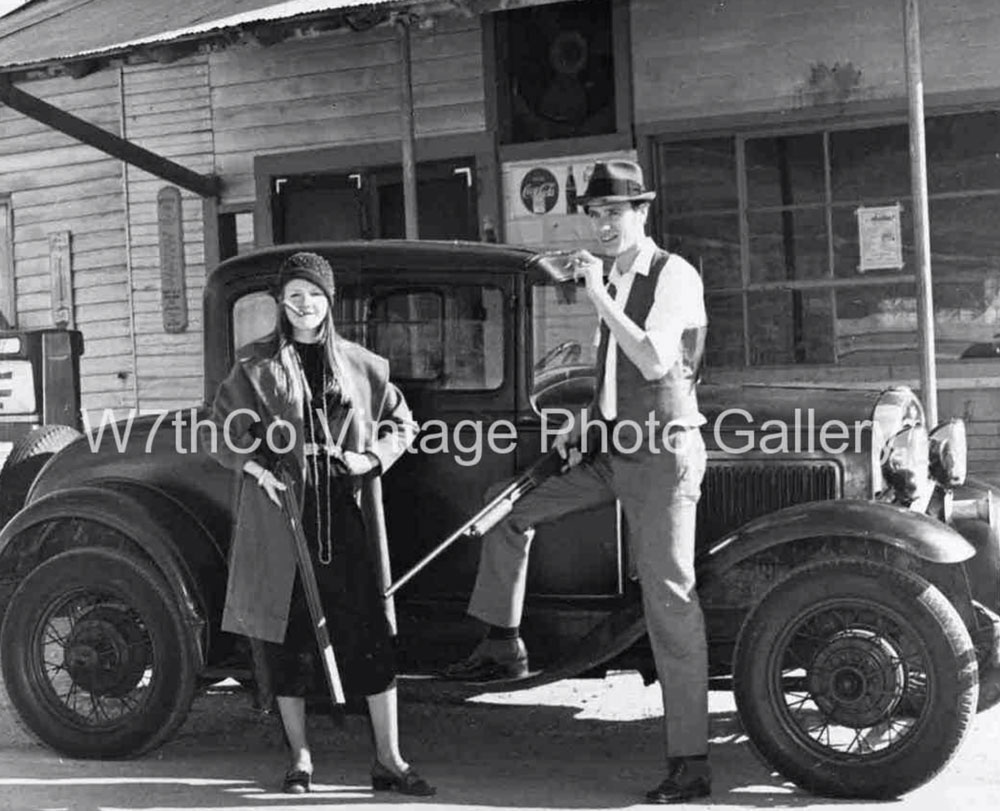 Not long ago we came across a photo that seemed like it might be from the Prohibition Era at first glance. A closer look and details like the age of the gas pump started to make us think it was probably taken much later. But then we were still left with the questions; who, why and when?

The envelope provided no relevant information. So we were stumped by this Bonnie & Clyde remake. However, we added it to our online gallery in the Street Portraits album and went on to the next photo, the next photo and so on…

Then on Black Friday two gentlemen came into the gallery for the first time. They browsed photos in the bins and the Autumn show on the walls. One of the men started talking about Ray Burt and what a nice guy he was. He went on to tell a story about one particular photo shoot that he had a lot of fun with… for a Bonnie & Clyde photo.

Kim called the men over to the iMac and said “let me show you something.” When she showed them a photo from the online gallery one of the men shouted “that’s me!” and laughed before telling Kim she was almost giving him a heart attack. His name was “Jackie” Jack White.

Jackie told the story behind this 1971 photo. Carolyn Spruill called Jackie up with an idea for a senior superlative photo and asked him if he could get shotguns. They borrowed a 1929 Ford Model A from the Sowells and set everything up at an old store in Bigbyville along with Ray Burt and one of his field cameras. The rest, as they say, is history. History we would not have known if it were not for first hand knowledge. We love it when we learn more about our photos. Especially when visitors to the gallery are the one’s who fill in the blanks with their discovery.

You can see this photo and more in the Street Portraits album or come by and we’ll show it to you. Who knows? You may even find yourself in one.