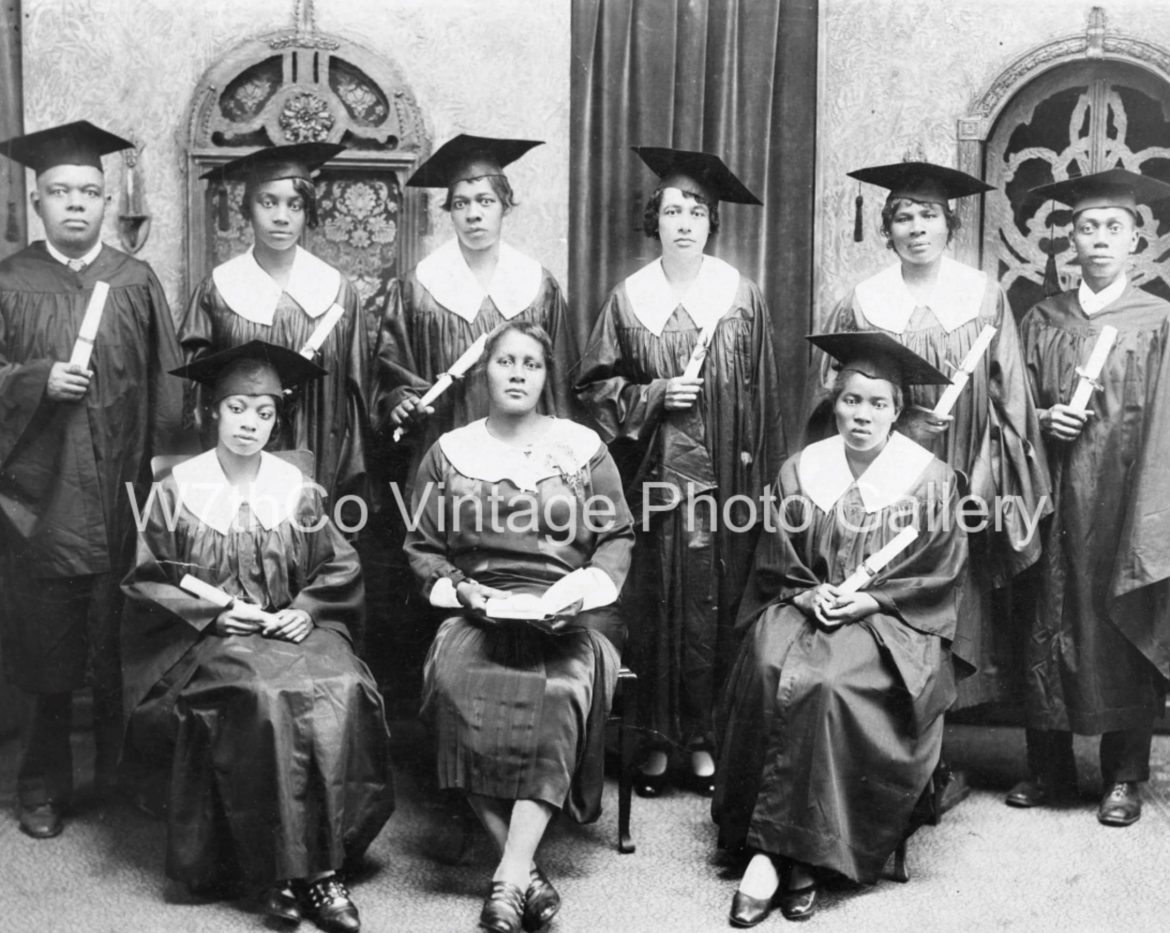 Readers of our posts know that, although we can tell you a lot about our photos, we have lot’s of mysteries to solve. This photograph of graduates is just one of those.

There was no information with the negative. So, we don’t have a year or a name to start with. It is an interior photo without any text or signage and nothing to reference as a possible location. The mortar boards, robes and diplomas seem to indicate these are graduates, but… high school, college, something else?

We thought it might be College Hill School, but we have photos of the interior of that school and this just didn’t look like College Hill. After asking some friends that had first hand knowledge of the school and they agreed that this was not College Hill. So, we started looking further out of the area and eliminated some other schools and colleges by examining available photos.

Judging from the type of photo, the hairstyles and shoes (unfortunately the gowns hide their clothing) we believe this is from the early 20th Century. Most likely from the 1920’s when the bob hairstyle was all the rage with women. Dating photos can be done by using this frame of reference and usually is fairly accurate. However, knowing the age of a person (or persons) in a photo is much more difficult. Are these graduates high schoolers or undergrads?

Back to College Hill. The background of the photo is not College Hill, right? What if the background is not an interior, but instead a backdrop? Turns out, that’s what it is, a photo backdrop. Early photo studios used finely painted canvas backdrops for portraits. We came across an example of a College Hill graduate from 1905 that had a photo backdrop. So we took a closer look at this photo and realized that we had assumed that the moldings and curtains were real. It wasn’t. There is a shadow where the backdrop doesn’t quite come to the ground and the rug continues under the edge of the canvas. That made us wonder if this indeed is a group of graduates from College Hill that were photographed in a studio or perhaps the photographer brought the setup to the school. We may never know, but it is an intriguing idea and a real possibility.

The technique is called Trompe l’oiel and in this case it did indeed “trick the eye”. Well, at least for a little bit. You may have seen antique photos with similar backgrounds. We have more photos with these sorts of backdrops too. Come by and we’ll show you some. Oh, and if you know anything about this photo we’d love to hear about it!