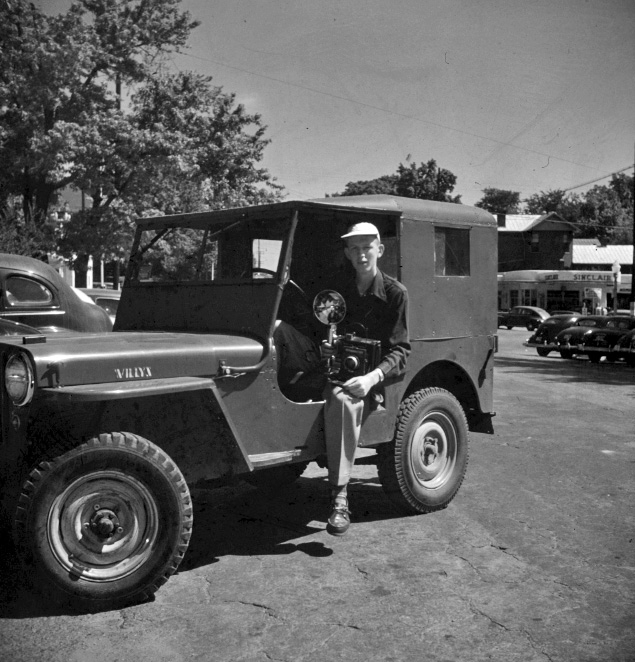 I love my job. We were manning the gallery on a somewhat sunny Saturday afternoon when a couple came though the door. We greeted them as we do other visitors to W7thCo, but this was no ordinary visit. There was a connection between the photos and this couple that you could tell from the way their faces lit up as they started to make their way past the first couple of frames. The gentleman then said, “I was Ray Burt’s best friend. We grew up together.” They paused to look a portrait of Ray Burt from 1963 and read the story board we have near the entrance to the gallery. His wife then said, “We wondered what had happened to Ray’s work.” Our answer, of course, was hanging on the walls right in front of them.

We spent a lot of time with Mr. and Mrs. Meador looking at photos and sharing one of Ray Burt sitting in his Willys Jeep and holding his camera that was taken around 1950 (we had just gotten the print that morning). You could see the emotion in both of their eyes as they reminisced and smiled at the young man smiling back at them in the photo. Being a woman of manners, Mrs. Meador thanked us and said, “Well, we’ve taken up too much of your time.” We told her that was not the case at all. That’s what we are here for, to show the photos, talk about stories and people, and to listen as well.

What Mrs. Meador had said about “what happened to Ray’s work” stuck with me. We have the life’s work of Ray Burt in our hands every day. It would have been a tragedy for it to have just been lost. But meeting the Meadors I now know that Ray Burt’s work is also in the memories and hearts of the people he photographed, and of course, his good friend. He had many.