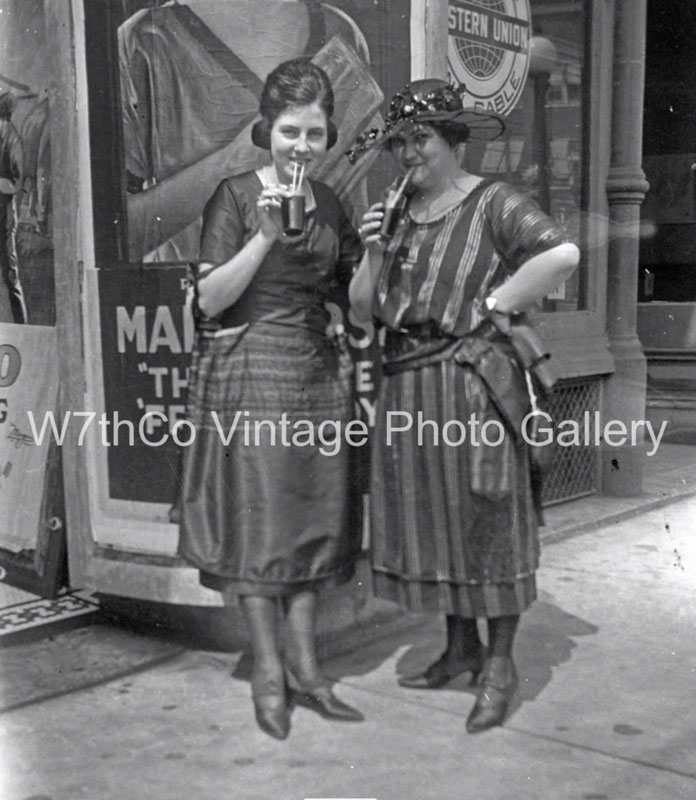 W.A. Orman had an interest in photography from an early age. He also had an interest in the young woman who worked the ticket booth at the Grand Theater, Clista Ray Tanner. He took photos of the entrance to the Grand Opera House shortly after it began to show movies and was renamed the Grand Theater (it would later be called the Princess). On more than one of these occasions he persuaded Clista to step into the picture. No doubt trying to woo the young woman who would become his wife and the mother of his son Buster.

We are happy that W.A. did take these photos because it gives us a glimpse into the grandeur of the old theater facade with it’s cast iron pillars (from Nashville) and the change from opera house to movie house. There are lobby cards, movie posters and sandwich boards promoting the motion pictures. Those help us date the photos as well.

One of these fun photos has Clista joined by another young lady that may be her older sister, Berthia c. 1920. The ladies are well dressed and posing sipping sodas from glasses through straws. The poster behind is for Mae Marsh starring in “The Little ‘Fraid Lady” which was released in 1920. The poster in the lobby to the left is for “King of the Circus” (November 1920) starring Eddie Polo. We love this photo as it shows a very different time in Columbia, but one that is an experience that continues today, going to the movies. We have wanted to print this photo for a while and chose it for our 2019 Autumn Show. You can see it through the end of the year. You can see it and the others of the old theater online. Just search for Clista.