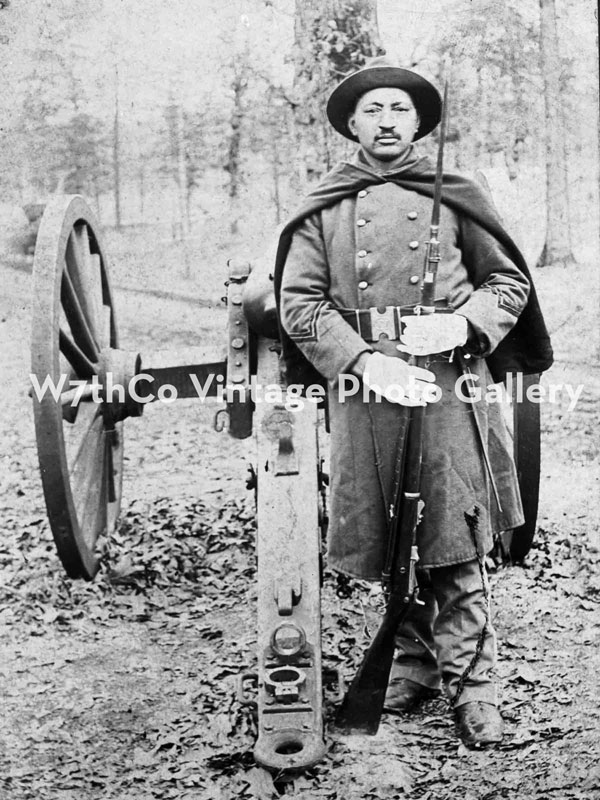 Lately we have made some really interesting discoveries. As we do, we are adding them to an album called Recent Finds so you can see what we’re finding.

The photo with this post is one of those recent finds. All the information we had came from the envelope containing the negative and the inscription “For Rev JM Granberry”. That’s when the work begins. We found a couple of references on the internet for Rev. J. M. Granberry and found that he was minister at St. John A.M.E. during the 1950’s, but that did not help with the identity of the man in the photo because he clearly comes from a different period of time.

Upon close examination of the uniform, we were able to date the belt buckle as a U.S. Infantry 1886 ammo belt plate. The rifle is most likely a model 1873 Springfield “trapdoor” rifle (Springfield model No. 99). His overcoat and cape are likely U.S. model 1885/1887 great coat and the inner lining of the cape denotes branch of service. Unfortunately, as a black and white photo, we cannot be sure of the color, but it does appear to support the assertion that his is in the infantry. The question then is what conflict would a soldier like this have been involved with? The Spanish American War seemed a possibility except the rifle seemed to be out of date for that until we found a story about the 8th U.S. Infantry using this rifle in Cuba 1898. So we did a little more digging and found a Cpl. J. M. Granberry that served during this conflict and time in a later application for a headstone.

With all this information we did a little more digging and found a Cpl. J. M. Granberry that served during this conflict and time in a later application for a headstone. However, that is all we know at this point and have not been able to confirm the identity or place the photo. Now we have more questions; Is this J. M. Granberry? Was he relative of Rev. J. M. Granberry? How did the negative come to be in the Orman Collection?

We’ll keep researching. If you know anything about this photo or if we got something wrong and you can point it out, please let us know. Or if you want to get a closer look, just come by the gallery.