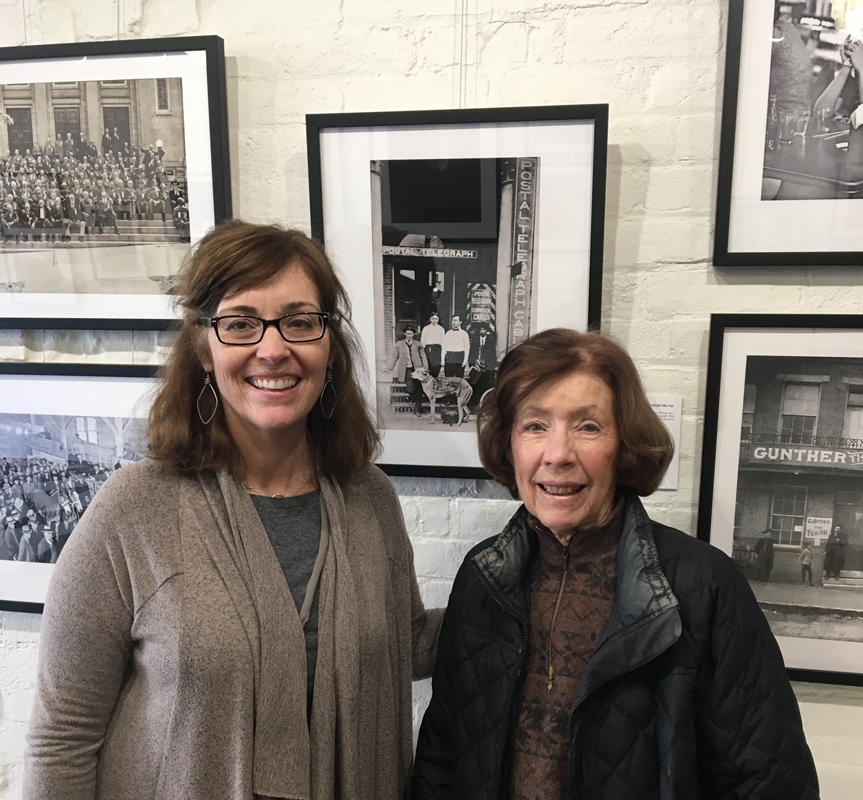 One of the things that we hoped for when we were putting together our vintage photo gallery was to get people in Columbia to help us identify people, places or just fill in the blanks so to speak. Recently that happened in a way that… well, far exceeded any expectation.
When Martha “Bitty” Crozier walked through the front door, we had no idea who she was, but our day was about to get much brighter. It turns out that Bitty had been told by a friend that her husband, Hoos Crozier was in a photo in a gallery downtown and she should go by to see. Bitty introduced herself, as any well mannered Southern lady will, and began to tell us about the photo we have on display of Hoos leaning against a Gulf pump in the 1940’s just across from the James K. Polk Ancestral Home. We listened intently to learn more about the gentleman in one of our favorite photos that we titled, Andy and Barney (come see it… you’ll understand). Then Bitty began to explore the other photos hanging on our walls. She also took time to admire some of the jewelry that is displayed (appropriately) on our antique display case. As she turned to view photos on the opposite wall she suddenly stopped and said, “That’s my father!” as she pointed to an early 1900’s photo of four men standing in front of the Postal Telegraph Company located in the Bethell House Hotel.
You cannot imagine how exciting it was to have this sort of discovery unfold right before your eyes. Bitty went on to tell us that her father, Waverly Hayes Jackson, had been a telegraph operator as a young man. She told us that she had a smaller print of the photo that had belonged to “Daddy Wave” and that she had given it to her daughter. Bitty called her daughter and asked her to take the photo off the wall, out of it’s frame and read the inscription her father had written on the photo. Just like that we found out the names of all but one of the men and that it was from 1912.
Our visit with Mrs. Crozier went on and she actually returned a second time that day to bring photos and newspapers to share with us. Among the items Bitty brought by were her father’s memoirs (which I have read completely) and a Mule Day souvenir publication from the 1930’s. She was generous enough to let us keep that.
Thank you Bitty Crozier. We cannot wait until you come by the W7thCo Gallery again.