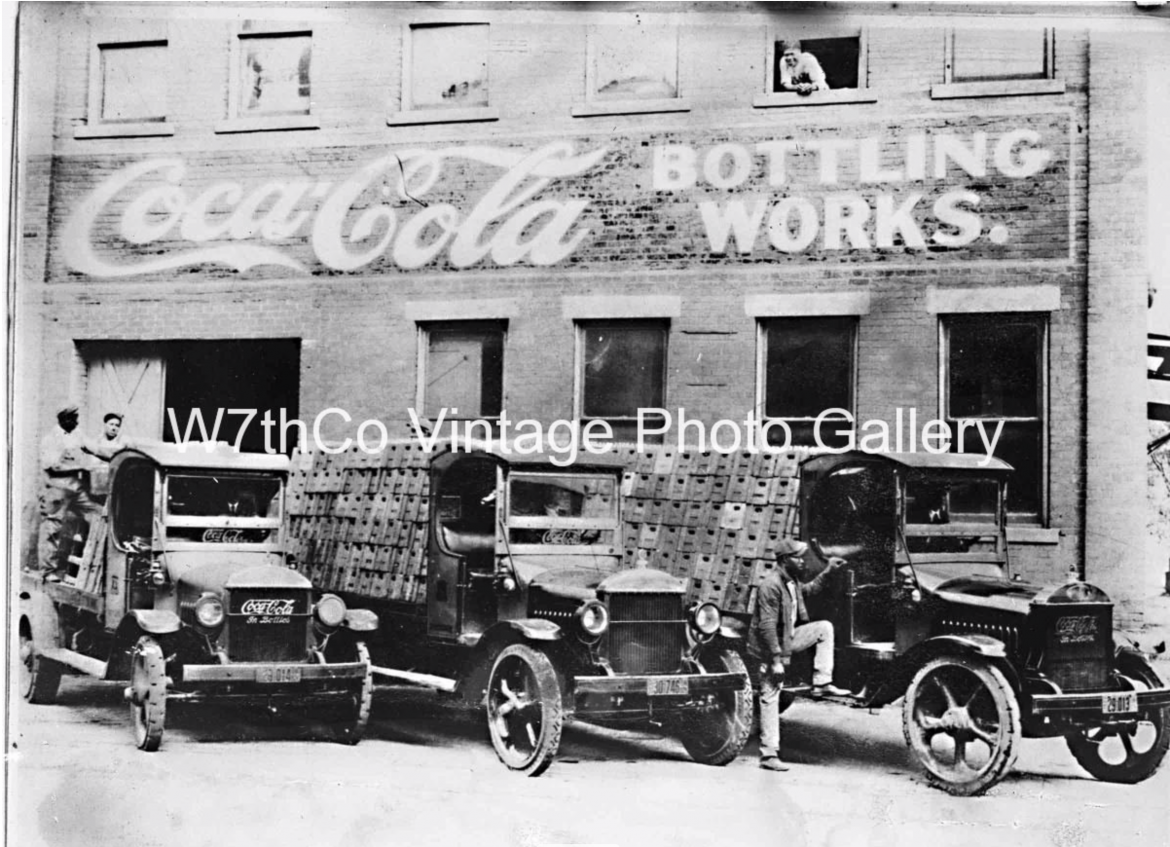 Not too long ago we came across a nice photo of a Coca-Cola bottling works that really posed a challenge. This was one of those negatives in an unmarked envelope. So the first question was, what year was this? It looks quite old, but sometimes a negative in poor condition can make a photo seem older than it is. We did a little digging and discovered that the Coca-Cola bottling works came to Columbia around 1913 and was located on the corner of School and W 10th St., but by 1924 had moved closer to the depot to the NW corner of S High and W 11th St. Of course we were hoping for this photo to be the original location and maybe even from when the bottling works was new. The Ford trucks certainly looked like they were the right models for that time. However, just like today, trucks can be used for a long time. Turns out these trucks are Ford Model TT which were manufactured from 1917 – 1927 and were sold originally sold as a chassis with the cab, etc. being custom made for whatever the end user needed. Clearly these were very customized for Coke bottle delivery (you gotta love the custom Coca-Cola grills). Hard to date the trucks exactly because of the similarity over the years and all the customization.

So, on to the license plates. Unfortunately they are not crystal clear as they are not the focus for the photo. However, they are recognizable as Tennessee plates. The format for the plates is a little tricky as Tennessee started issuing plates that were for cars and trucks in 1915, but later issued plates specifically for trucks. So, the format of the serialized numbers could be from different years. The photo is, of course, black and white so there is no way to know exactly what color the plates were and that can be used to determine the year. What we had to do next was a process of elimination. We researched the number format and narrowed down the years. Then we looked for years that plates came with a light background and dark numbers. That left us with only one year that fit both the 6 digit number, stacked text on the plate right and the color combination.

We feel pretty confident that this photo is from 1930 based on the plates and the trucks. Which means that this is from the S High St. location. One of our frequent visitors, and an avid Coke fan as well as bottle collector, Jerry Dodson provided us with a copy of the 1929 Columbia City Directory so we could verify the address of the bottling works. Our friend Mike Mefford gave us some insight on the photo as well. Mike pointed out that the radiators on the Ford trucks are oversized for the vehicles and were, no doubt, customized to keep the trucks from overheating while loaded with bottles for delivery.

We love this photo. It doesn’t get much more American than having two iconic brands, Coca-Cola and Ford, together in a really wonderful image of Columbia from 1930. Come by and see the large print we have in the gallery. Or if you have more info to add to this story, we’d love to hear all about it.