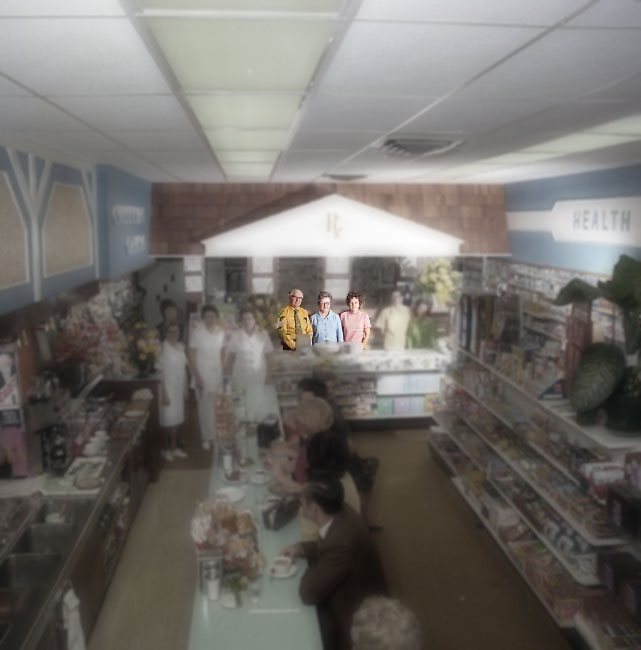 Not long ago our new neighbor at 32 Public Square, Craig Eilermann, purchased a couple of photos of Reynold’s Drug Store to hang in his store, Flag World, so people could see what it used to look like when it was a pharmacy years ago. He chose an exterior shot from the 1930’s and an interior from the 1970’s too.

Last week the Fishers, “Buddy” and Carolyn, went to Flag World because they were curious to see what the old Reynolds building looked like today. They both spent a lot of time there growing up. Carolyn’s father was Thomas Huey Reynolds, the owner and namesake of the business. Of course they noticed the photos of Reynold’s Drug Store hanging on the wall. However, they recognized some people in one of the photos too. Craig told the couple that he had bought the photos from W7thCo Gallery across the street.

So, Buddy and Carolyn came to see us. They told us the story and we pulled up the interior photo from 1971. Carolyn pointed out her father, mother (Mariruth), and herself standing behind the counter in the family pharmacy. Buddy pointed out another pharmacist, Wilson Daniels to the right of Carolyn in the photo. He also showed us that there were four floral arrangements that still had cards with them in different parts of the store. He explained that the pharmacy had just been renovated and those arrangements had been sent by friends to the Reynolds.

Believe it or not, this is the sort of thing that happens every week. People come to the gallery and find family members, friends or other familiar faces. First hand knowledge is our favorite way to learn more about our photos and our visitors bring that. The more people that visit, the more we learn. So, as always, we invite you to come and see us… bring a friend or family member too.