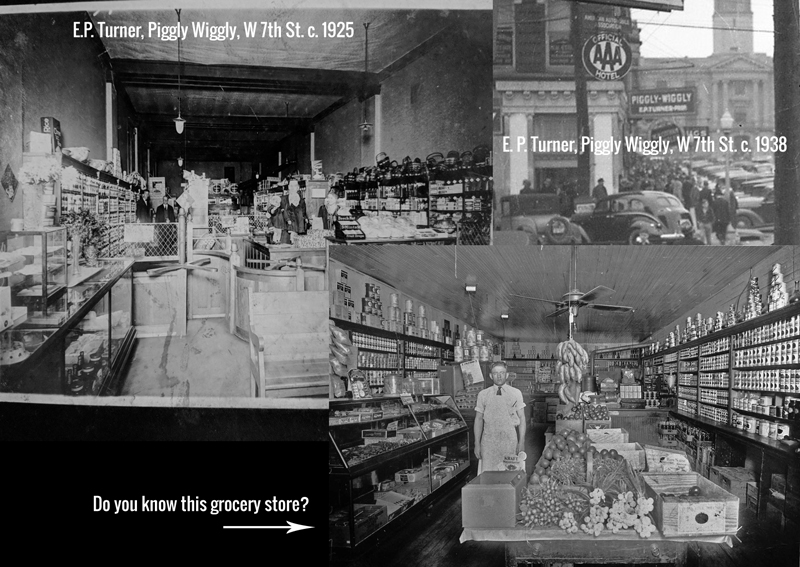 One of the selections for our opening show was the interior of a grocery store from the 1920’s. At the time, we did not know for sure which store it was, but reasoned that it might be the Piggly Wiggly on the corner of W 7th and Garden St. The grocer in the store is standing along side a table filled with produce and other groceries that would appear to be self-serve (a hallmark of the early Piggly Wiggly). We also had a wonderful shot of downtown Columbia from c. 1938 where the streets are full of cars and people along with great signage for all of the businesses, including the Piggly Wiggly, E. P. Turner, Proprietor.

Then we had a visit from a family member of Mr. Turner, Jade Kayser. Like any time a relative that might have some insight on a photo comes in, we pulled out the picture and began discussing whether or not they recognize the image or anyone in it. Jade said that it looked similar, but not exactly what she remembered from seeing family photos. A day later she sent us a photo of the actual interior of the store from 1925. Great photo, but it proved that we had the wrong store attributed to our photo. However, it did give us a chance to see the way the grocery store looked when it was on the corner of W 7th and Garden Streets. So cool to see the wooden turnstiles and cases filled with baked goods and other groceries (some brands that are quite familiar).

So, we are back to square one and still searching for the identity of the store in our photo. Since then, we have had a couple of visitors that seem to think it might be Sowell’s Grocery on Public Square. I am reading a book by Frank Sowell right now and hoping that I can confirm the interior shot (or not).

Thanks to folks like Jade, we learn more about these amazing photos every day and how they tie the story of Columbia to the families that have lived here. We invite you to help us too. So, do you know what store this is?

Update Sept. 19, 2019: We have now confirmed that this store is Sowell’s Grocery and that the man in the photo is Herbert Sowell (proprietor).