The remarkable ability of this self taught artist is displayed in every work that she does, whether pen and ink, watercolor or oil. Mildred Hartsfield finds and depicts beauty in all venues of her art. Her work graces the corporate offices of General Motors in Michigan, the Maury County Courthouse, Maury Regional Hospital, and countless homes and restaurants in Middle Tennessee as well as other states. Mildred was born into a large family, ten brothers and sisters, in a small Tennessee town just South of Lawrenceburg, called Loretto. 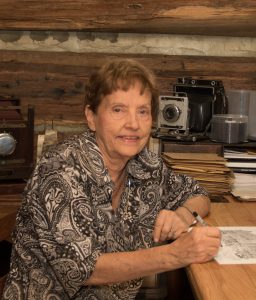 . Money for entertainment was scarce in her large family. She loved paper dolls and at six years old began to draw to make her own. That talent was quickly recognized, not only by her loving and supportive parents, but also by her teachers. As she grew up it was also a talent the boys in the community admired as well and what could later be better described as inspiration. Loretto is known for the manufacture of caskets and, as a you girl, Mildred began painting religious scenes on the caskets’ interior panels. Her parents sent her to Sacred Heart Academy in Cullman, Alabama where she studied music, but since there were no art teachers there, her natural talent was neither altered nor stylized. Her instructors recognized her talent and gave her much encouragement. She married Wayne Hartsfield and moved to Shelbyville, Tennessee where her two children Darrel and Carla were born. She joined the Graphic Arts division of Jostens and began a career in commercial art. This position provided a wide range of training; she designed Santa Claus on trucks, cyclonic mixers, parking meters, Christmas cards and artwork for buildings. The work was very challenging and hard, but Mildred stayed at Jostens for twelve years. The family moved to Columbia, TN in 1974 and established the Lemon Tree Gallery. Mildred fell in love with the history of the many beautiful sites she found in Maury County and wished those places to be preserved. As she began to depict familiar scenes throughout the County her work found an enthusiastic audience. Many home owners engaged her to depict their homes. Her prints were sold all over the Country and were proudly displayed in the homes of former Maury Countians who ached for a view of home. Though some of the buildings in the County had been lost over the years, Mildred recreated their beauty using old photographs.