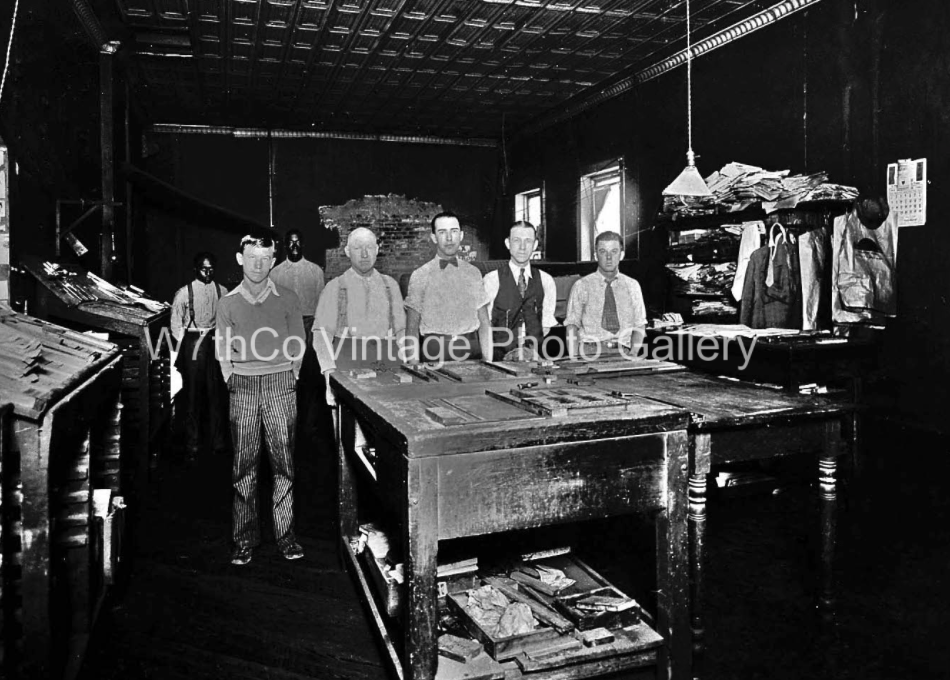 When we were choosing photos for the W7thCo Gallery opening just before Christmas last year, there was one stark image of a group of men standing in what was obviously a print shop. However, what was not obvious was just what they were printing and where it was located. It seemed that a newspaper was most likely because there appeared to be stacks of newspapers to the side. So, the question was what paper? Judging by the size of the room and the position of the windows, we eliminated the Herald, or at least we suspected that it was not likely the right paper. Then, while reading Frank Sowell’s book, All the Old Familiar Places, he mentioned that the Maury Democrat was once located on the Northwest corner of Public Square in the upstairs and basement. A quick look on Google maps confirmed that the windows had a very similar orientation to those in the photo. The width of the building was the right size and it does have a basement. Did we have a match? Well, it seemed quite possible. I reviewed Frank Sowell’s comments about the Maury Democrat and David White sent me a photo of a 1935 front page from the paper that lists the address as Public Square. Then Ashley Brown dropped by the gallery to help me with the identity of some majorettes in a 1942 CHS Band photo. By chance, I happened to pull out the newspaper printer photo and tell him that we now believed that it was taken at the Maury Democrat. Ashley immediately pointed to the photo and said, that’s Ashley Sowell. Coincidentally, Ashley was named after Ashley Sowell, the publisher of the paper at the time the photo was taken. Maury Democrat confirmed! There may also be another Sowell in the photo. Tommy Sowell worked for the paper as well. Come by the gallery if you knew Tommy or anyone else that worked for the newspaper in the 1930’s or you can see the image online (above) and the Opening Show gallery.